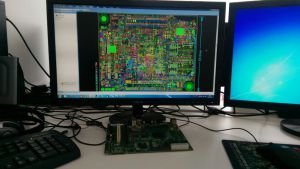 AmigaOne A1222 updateTalking about communicating, I receive a lot of requests for information about the release date for the AmigaOne A1222. At AmiWest 2017 and Amiga32, in agreement with Hyperion Entertainment, I was able to present the first public showing of the AmigaOne A1222 running a pre-release beta version of AmigaOS 4.1. I was able to demonstrate that AmigaOS4.1 is very stable on the A1222 which also fully supports the latest RadeonHD 3.x, including the new 64-bit VRAM feature, along with Warp 3D Nova and Warp3D-SI. However, I did reveal that work was still ongoing on the Audio and Ethernet drivers and well as FPU optimsation. The A1222 has not been totally cut-off from cyberspace since the AmigaOS 4.1 beta iso included a driver for an inexpensive USB-to-Ethernet device which allowed the A1222 to connect to the web. 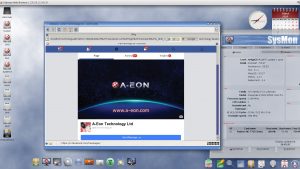 A number of the beta testers, including me, have been using the device for online access and I even wrote and posted an earlier blog using the device/driver. The USB-to-Ethernet device was a good stop-gap measure but obviously not suitable for the final AmigaOne A1222 release.Remote Desktop on AmigaOne A1222 to Windows PCI’m actually writing this blog using a combination Odyssey and Remote Desktop on my AmigaOne A1222 to test out a new on-board Ethernet driver written by AmigaOS 4.1 developer Rene’ Olsen. 🙂 .I’m pleased to report that Rene’s driver appears to be very stable and works well. I’ve downloaded multiple copies of the latest Enhancer Software v2.x beta archives and installed numerous programs and utilities from AMIStore and transferred gigabytes of data over my LAN without any problems.Running OWB on AmigaOne A1222Even better the driver appears to be on par and perhaps a little faster that the standard OS4 network driver for my RTL8139 Ethernet card. Incidentally, Rene’ also wrote the driver for the USB-to-Ethernet device so I suppose it’s no surprise that the initial release of his Ethernet driver works so well. I’ve attached a couple of screengrabs showing Remote Desktop and Odyssey on my A1222, two programs which are always a good tests of network performance. The driver has now been issued to the A1222 beta testers for thorough stress testing. Rene’ received some help from Justin Hibbits who was recommended to Steven Solie by Alex Perez. Alex is another A1222 & X5000 beta tester who has a particular fondness for Linux. Justin is a committer at FreeBSD who, according to Steven, is looking for help with the FreeBSD port. If any Linux motivated A1222 beta testers want to help Justin complete FreeBSD for Tabor/A1222 please make contact and I will pass on your details. We already have the Atlantis and Pathfinder Tabor boards working 24/7 building Debian SPE thanks to the work of John Paul Adrian Glaubitz.

The New Compatible A500(+) case is the perfect replacement case for your aging yellowed Amiga 500 case. Manufactured with the same quality standards as the New Compatible A1200 cases, it comes with extended support for Apollo boards as well as USB/HDMI/SD cards ports. No more hassle opening the case to replace or connect anything. Treated Anti-UV, it will stay fresh and as new for the next 50 years.